Over the last years we’ve been involved in some next level AV shenanigans with our friend Colin Benders and his Modular Synth.

Together with Tristan Gieler we’ve created visual systems, that are so in sync with his Synth, it’s scary.

Because of the complexity of the whole modular setup we’ve build some redefining Software and Hardware that converts his sound and melodies into both moving visuals and light. Whether it’s visualising 100 speakers individually by the sound they produce or building hardware that converts his Control Voltage to OSC: we’ve pretty much married visuals and modular synthesis in multiple successful projects.

It’s almost an annual recurrence when Colin Benders takes the stage with his orchestra of speakers. And every year there seems to be more speakers to visualise and more sound to map to those visuals. Every year we tend to visualise each individual speaker to it’s corresponding audio output. Basically when speaker makes sound, we make picture.

This year Colin wanted to expand his orchestra from 32 speakers to 75 speakers. Quite the bump up in quantity but also in quality. about 57 of these speakers were standing on the stage of the Concertgebouw where an orchestra usually sits. Another 18 speakers were placed on each of the 18 pillars in the main hall. These were mainly used as a surround reverb tail of what was happening on stage.

We were able to receive the audio of each of the speakers over network through Dante, this absolutely saved us a lot of hassle with audio cables because each of the 75 channels ran over one ethernet cable. On our side we wrote a max patch that converted the dynamics of the audio channels to a texture where each of the 100 cells represents the dynamics of each of the speakers. Black means no audio, white means all the audio and everything in between. From there on we used this texture as a mask for the content in Resolume. Also we were able to drive the intensity of 18 led strips that were placed alongside of the 18 speakers hanging in the pillars in the main hall over Artnet. 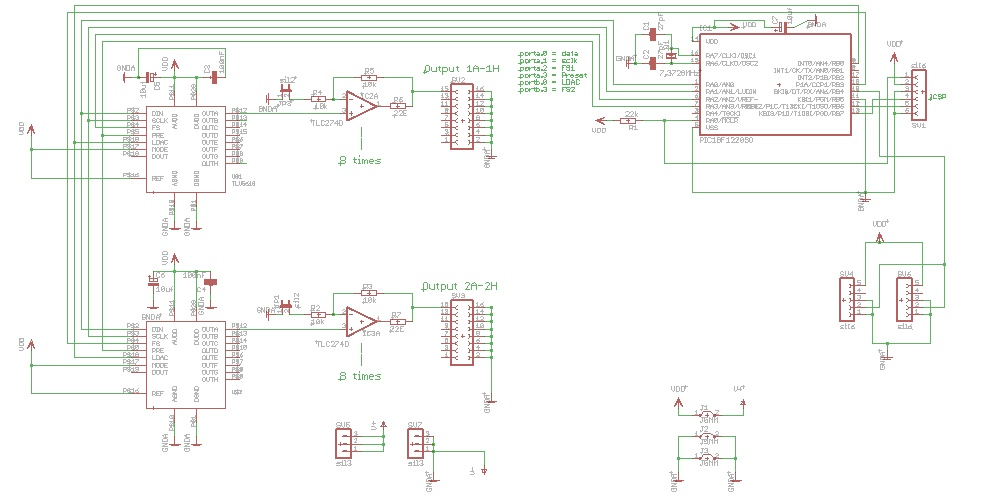 Our vision for building these systems was always from a modular approach. Because Colin tends to improvise we were never certain of what was going to happen, so we had to be prepared for anything.

All the systems we’ve build had all the inputs you could possibly need and an easy way of routing them to a logical destination. Whether it was Control Voltage to animations or Envelope Followers to Opacity we were ready for it all.

We even build the hardware to actually get all the pitch and trigger information (with over 64 channels). Routing these signals was as easy as selecting a source and clicking on a destination in Resolume.